A new analysis of out-of-work individuals by Martha Ross and Natalie Holmes of the Brookings Institution provides a new lens for understanding this diverse group of Americans. For example, the analysis finds that out-of-work young adults in some large cities and counties are nearly twice as likely to have worked in the past five years as similar adults elsewhere in the country.

The current analysis focuses on adults age 25-64 – the authors plan to release a report focusing on young adults aged 18-24 in October – but one of the major clusters that emerged is “young, less-educated, and diverse.” This cluster has a median age of 30 and is almost entirely made up of young adults age 25-34. (Full disclosure: I gave feedback on an early draft of this research.)

To create their clusters, Ross and Holmes first excluded populations unlikely to be looking for full-time employment: “traditional” students, individuals who retired early or are permanently out of the labor force due to disability, and stay-at-home parents. They then ran cluster analyses of the remaining out-of-work population in the 130 large cities and counties in the United States with at least 500,000 residents. Within each jurisdiction, out-of-work individuals were clustered according to age, income, recent work history, racial/ethnic group, disability status, English language proficiency, and other factors.

Between six and nine clusters per jurisdiction were identified, for 828 clusters across all jurisdictions. To allow for comparisons across jurisdictions, clusters were aggregated into “groups of groups.”[1] One of these clusters, “young, less-educated, and diverse,” includes about 1.2 million young adults with a median age of 30 across the 130 large jurisdictions in the study. Only 52 percent report any work experience in the past five years. (The following and other facts can be found in the data appendix of the study, including for each jurisdiction in the study). Forty-six percent of the cluster are receiving SNAP, and average annual income is $30,753. Sixty-eight percent are black or Latino, and 35 percent are foreign-born (17 percent were born in Mexico). None has completed education beyond high school.

Several characteristics of the “young, less-educated, and diverse” group related to family structure set them apart from the other out-of-work population clusters (see p. 12 of the full report):

These overall statistics obscure significant differences among jurisdictions. The below chart highlights 25 jurisdictions that have “young, less-educated, and diverse” clusters. Even though none of these young people are currently working, Hartford young people in this group are nearly twice as likely to have worked in the past five years as the “young, less-educated, and diverse” in Phoenix (75 percent and 38 percent, respectively). Similarly, 53 percent of Hartford youth in this group are categorized as unemployed, compared to 25 percent in Phoenix. Being categorized as unemployed means they’re available to work and have actively looked for work in the past four weeks, as opposed to those categorized as not in the labor force.

“Young, Less Educated, and Diverse” cluster in select jurisdictions, by work history in past 5 years 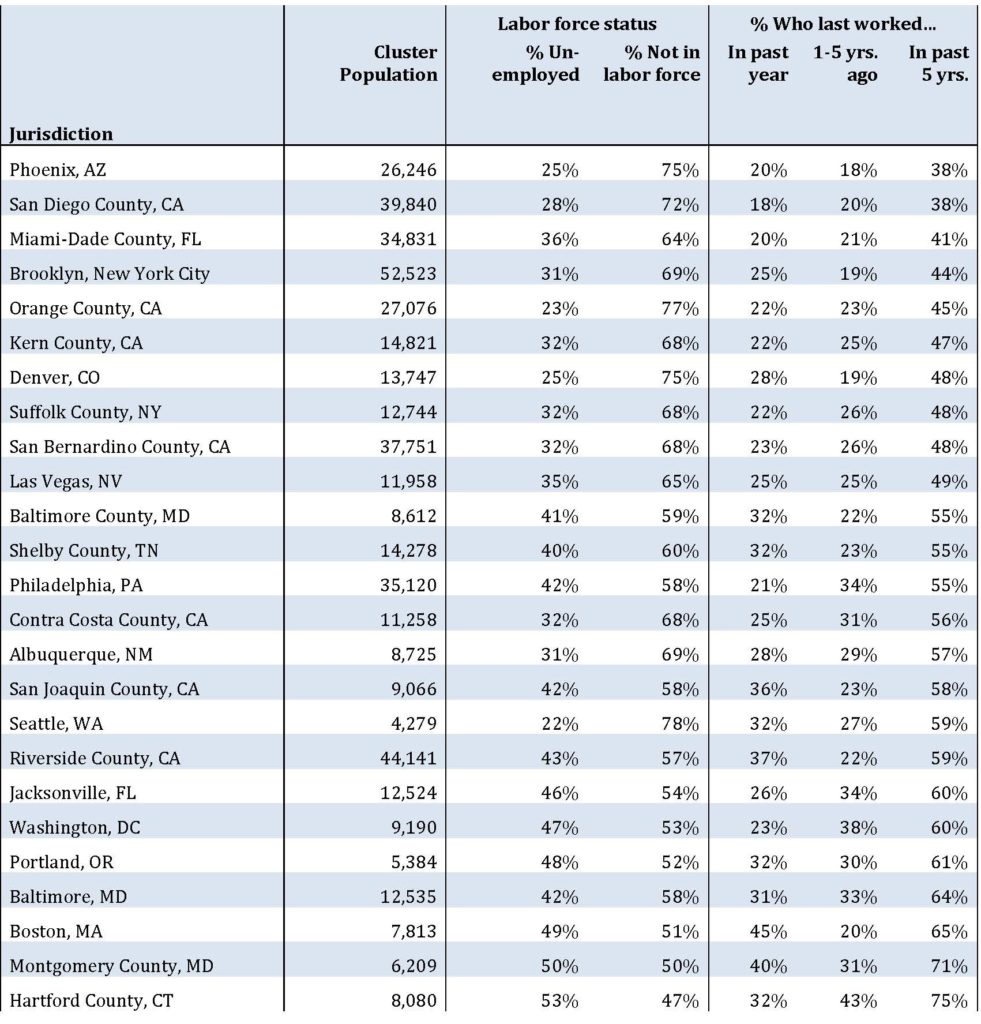 There are important limitations in research like this. First, Ross and Holmes note that their cluster analyses is “constructive” rather than “realist.” It’s meant to identify differences for the sake of description and analysis, not to propose that there are essential differences among these groups across all jurisdictions. Second, while the focus on jurisdictions with a population of more than 500,000 is necessary to achieve significant sample sizes through the American Community Survey data on which the study is based – and does include 48 percent of noninstitutionalized civilians aged 25-64 – it may obscure significant differences in less densely populated areas of the country.

Nonetheless, this analysis, and the accompanying fictionalized examples of individuals in each cluster, offers a unique new way of thinking about the out-of-work. The availability of jurisdiction-level analyses like this, and especially the youth-focused analysis out this fall, offers more ways to understand opportunity youth and introduce them to other audiences.

[1] Not all jurisdictions’ out-of-work population break down into the same clusters. For example, Manhattan does not show a high population of “young, less-educated, and diverse” youth; Manhattan young people who would part of this group in another jurisdiction are likely captured in the “less-educated prime age [age 25-54] people” cluster identified in the report. (I appreciate the help offered by Martha Ross, lead author of the report, in walking me through how to talk about this and some other aspects of her findings.)