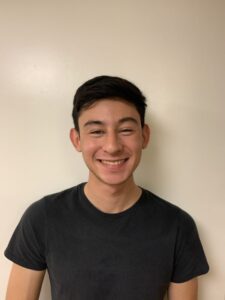 Quick Take. Born in San Diego, Jaime Jimenez moved with his parents to Tijuana at age 4. As he approached his senior year, Jaime concluded that he would never achieve his dreams if he stayed at his high school in Tijuana. Jaime managed to gain acceptance to a San Diego charter high school and, after repeating multiple courses, working weekends, and either commuting from Mexico or finding lodging with family or friends, was able to enroll in Southwestern College. Currently, Jaime is studying business with hopes of entering UC Berkeley in 2023 and eventually enrolling in Harvard Law School.

Early Life. Jaime Jimenez was born to parents who were professional artists and academicians. When Jaime was about 4 years of age, his parents decided to move from San Diego to Tijuana in hopes of establishing an institute for the arts. Given his parents’ profession, Jaime was constantly exposed to art 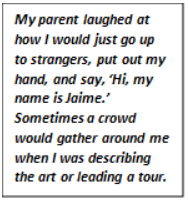 and artists and attended exhibitions at local galleries.

“I had a very interesting childhood,” Jaime recalls. “Rather than going to the playground or hanging out in my room I’d be going to galleries.” These experiences enabled him “to grow up much quicker” than his peers, and also helped him to develop sophisticated communications skills.

Making the Move Back to San Diego. Jaime’s lifelong dream was to go to college in the US and then to Harvard Law, but his options seemed to be slipping away. “Finally, as a senior I realized that if I didn’t make the leap to the US—make the move now—I’d be stuck in Tijuana and regret it the rest of my life because I would never realize my dreams.”

Numerous factors informed Jaime’s decision, including lack of support from teachers and students. Even more serious issue was the threat of violence. “It wasn’t unusual for students to be kidnapped,” Jaime reports. “You could be hanging out with students one week and then the next week they were gone.

Jaime researched educational opportunities available in San Diego and found a charter school that would accept him. “Sometimes I went back and forth across the border every day, which was a really tough challenge in and of itself. You have to get up at 5AM and wait two hours in such a long line, which sometimes snaked into not-so-great neighborhoods. So, I was in between living with my parents and I sometimes I stayed with my aunt in Chula Vista.

Unfortunately, while the charter school was willing to accept Jaime as a student, it was unwilling to accept any of the credits he had accumulated in Tijuana. “None of my courses transferred so I had to do them all over again,” Jaime says. “So, I immediately felt pressure

because I was so far behind.”

When his situation stabilized, Jaime decided to encourage his younger brother, then in middle school, to join him in the US. “He also hoped to come here for school,” explains Jaime, “and I wanted him to begin high school in the US so he wouldn’t have to make up all of his credits the way I did.”

Secondary Success and Postsecondary Transition. Despite the challenges, Jaime found his way. He completed four years of high school in two years at the charter, and also entered a dual enrollment program at Southwestern College, selecting coursework strategically so that it earned both high school and college credit. After completing his high school coursework, Jaime became a fulltime student at Southwestern College studying business. Jaime’s goal is to transfer to UC Berkeley and then to Harvard Law. 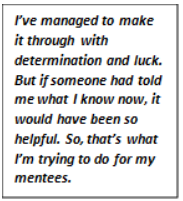 I’ll say to my mentees, let’s look at your financial aid and I’ll explain how to you can access the most support so that you cannot only pay for tuition and board but also other necessities.”

“Then, I teach them the importance of being disciplined and determined. I ask them, if you didn’t have to worry about making money, what would you do? They’re baffled by that question but then I try to explain that it’s not just about the money, but what you want the money for—what do you really want for your life? So, once they have that goal or vision, then they can develop the determination to achieve their goals.”

Policy and Advocacy. “I’m a huge advocate for teaching people how to speak effectively in public and how to make their case,” Jaime says. “It’s really an essential skill that young people need to master. How are you supposed to advocate at high levels to get support if you grew up in a situation where you didn’t learn those skills?

“Even more important is the fact that many kids really don’t understand what options and opportunities are out there for them. So, there should be so much more attention and resources placed on showing them the opportunities that exist.

“I also believe that we need to inspire kids again—to encourage their aspirations and hopes for the future. Of course, we know all the challenges like climate change and income inequality, but at the same time we need to inspire young people to think about framing solutions to those problems rather than to become hopeless about them. That’s what’s going to help find solutions to these tough problems and create the new jobs for tomorrow’s society and economy.” 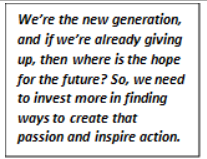 Personal Goals for the future. “My long-term goal is to be a pioneer in the field of space law,” Jaime explains. “I’ve read the entire United Nations International Space Treaty and it’s only 60 articles long. That’s just not enough once we have private companies throwing rockets to space and the moon. And I’m particularly concerned about one area of policy creation. We’re inevitably going to get a moon base—it just makes more sense to build rockets and send them from the moon because of the physics. But we have a very bad track record when it comes to doing things thoughtfully from the start.

So, what I’m concerned about is the potential to over-exploit the moon to the point that it affects us here on earth before we’ve even developed thoughtful policies. Of course, that’s a long-term issue, but look at what we’ve done with fossil fuels, the oceans, the climate, etc. I’d love to help us avoid that when it comes to space.” 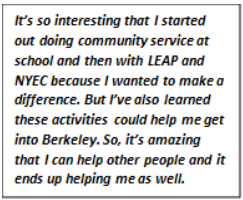 Emerging Leadership with NYEC. Based on his work as a peer mentor, Jaime was nominated for and awarded a LEAP Fellowship from the Annie E. Casey Foundation, which promotes youth leadership and advocacy. He was then invited to apply for an NYEC Youth Action Hour grant and was a winner at the 2021 forum. And based on these successes, Jaime was invited to join NYEC’s new Youth Advisory Council to bring a youth perspective to NYEC federal policy agenda.

“Working on federal policy really interested me,” says Jaime, “because my goal is to work in law. And so, it will be insightful for me to get background information in an area that I’m extremely interested in.”